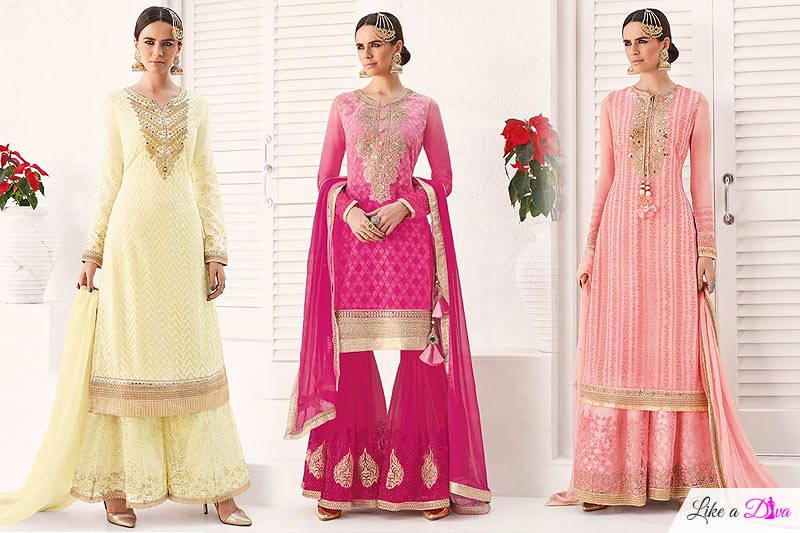 Trend Alert: Sharara And Its Cousin Gharara Are Making A Big Comeback!

Stylish sharara and its glamorous cousin gharara are making a big comeback in the world of fashion! The two styles are spotted on runways and even Bollywood celebrities are seen flaunting the trend. With flattering silhouettes and feminine cuts, the voguish duo embodies sassiness and are back to take the ethnic fashion world by storm.

Difference Between Sharara And Gharara 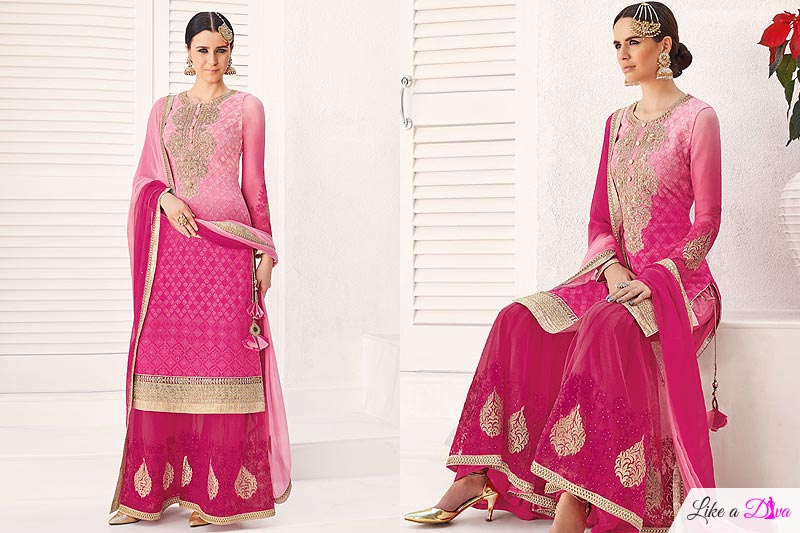 Sharara is a pair of lose, flared and wide legged trousers mostly worn with straight kurti. Though these days, it's even worn with designer anarkali kurti. A dupatta completes this three-piece ensemble. It is similar to modern day wide legged palazzo with the difference that sharara is embellished with zari, sequins, stones and beads work.

Explore handpicked selection of Sharara Suits at Like A Diva. 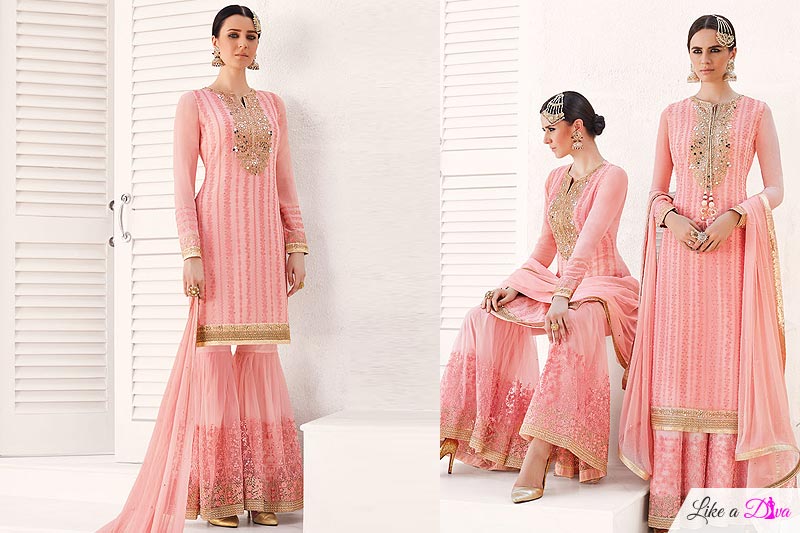 On the other hand, gharara is pair of trousers/pants that are fitted from the waist to the knees. There is a thick band (traditionally silver gota lace) right above the knees where the cloth is gathered or ruched resulting in a flare till the toes. The silver or gold lace is used to hide the joint. A gharara is worn with a shorter (mid thigh length) kameez/kurti and a dupatta. The traditional gharara requires around 12 metres of fabric. Like sharara, gharara is also embellished with zari, sequins, stones and beads work.

Explore curated collection of Gharara Suits at Like A Diva. 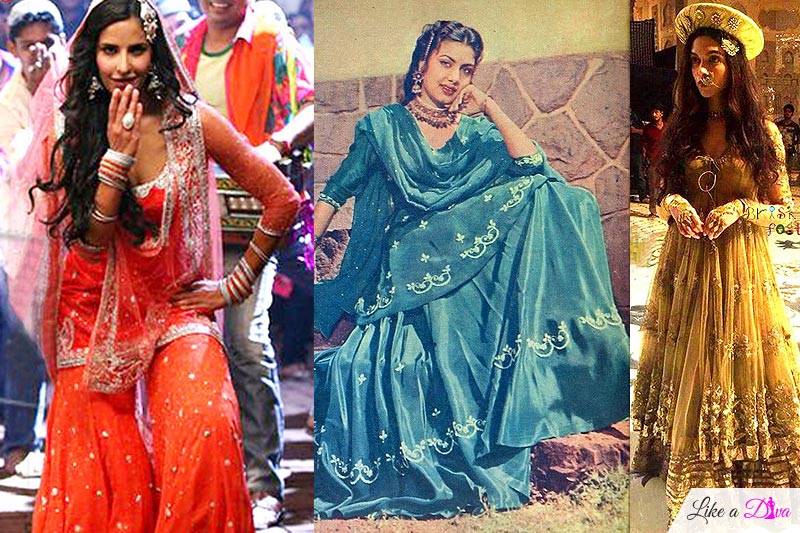 The origin of these regal attires dates back to the Mughal era. In those days, royal Mughal women used to wear these aesthetical outfits. Lucknow in Uttar Pradesh, earlier called the Awadh region is said to be place where these styles were first introduced. The popularity of these ensembles grew in 1970s and 80s, courtesy: Bollywood movies. Soon they became quintessential to the culture and cinema before sinking into oblivion. 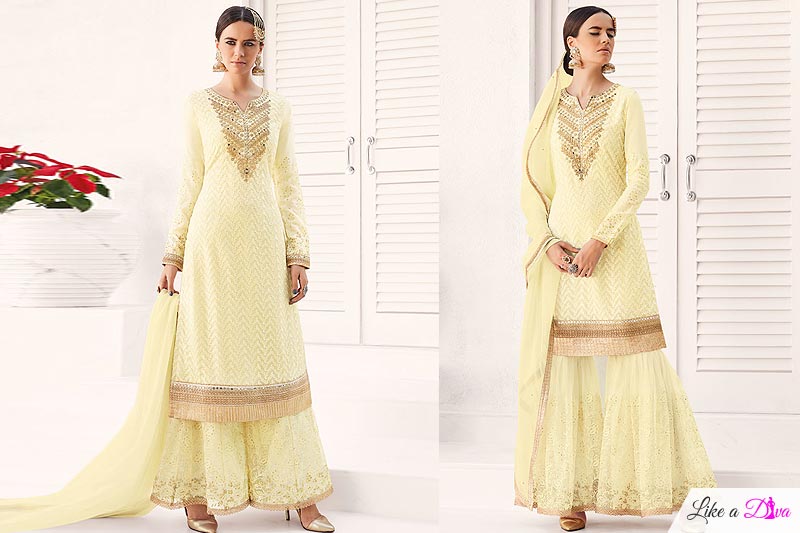 From early on, the pajamas/trousers saw a lot of design experimentation, giving us not just the flared sharara and gharara styles but also other variations like farshi pajama and farara, including the modern day incarnation - the palazzo pants.

Farshi pajama is a bottom wear similar to gharara but it is loose on thighs and the ruching is at few inches below the knee from where the flare starts and ends to touch the floor (farsh). And this is the reason why it’s called farshi. This Asian party wear is worn with a mid thigh length kameez or kurti.

Farara, another incarnation of the trendy style, is also pair of trousers but with no ruching and patti at the knee. It is similar to the flared pants or palazzos. 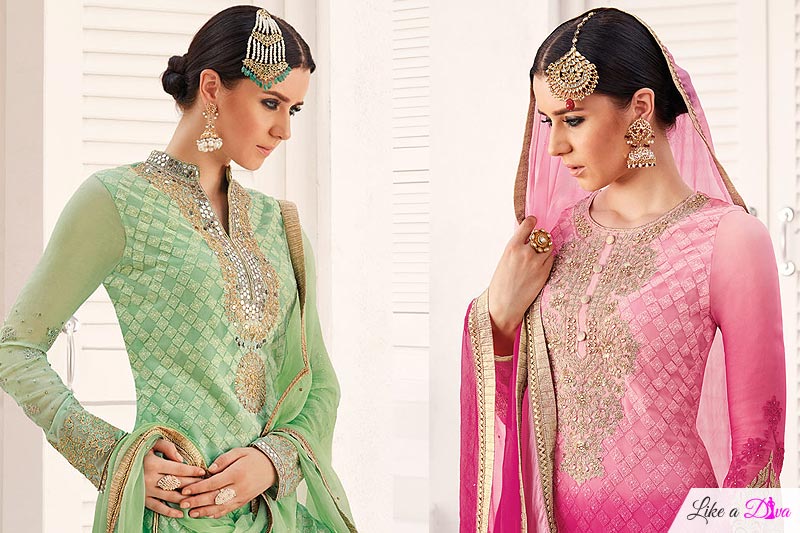 Shararas and Ghararas are mostly worn on special occasions, especially for weddings and festivals like Eid. These styles are must-haves for any bride-to-be in her wedding trousseau. Brides and female guests flaunt these designer suits during various wedding ceremonies, including mehendi, sangeet, engagement and the big day. 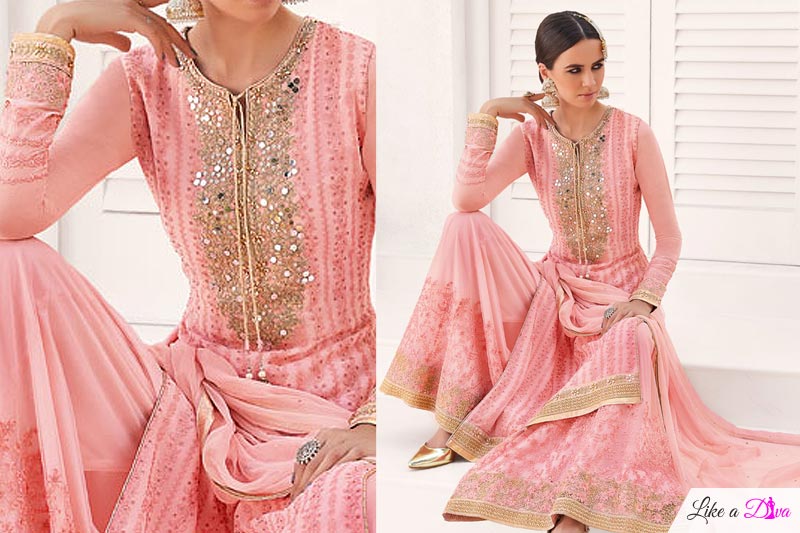 These ethnic styles are embellished with intricate zari, thread, sequins, stones, zardosi and beads work. During the Mughal era, pure gold and silver work used to be done on these ensembles. Floral motifs are most commonly embroidered on these Indian dresses. Talented artisans keep innovating and weave new aesthetic compositions on the fabric. The fabric used to fashion shararas and ghararas ranges from silk, chiffon, net, velvet to cotton blends.

The stylish sharara and its glamorous cousin gharara, have come a long way to become more chic and snazzier. Fashion designers and artisans are constantly working to add extra sassiness and more glitz to these styles. We are all floored with these trendy ethnic styles; do let us know in the comments below your views about the trend.