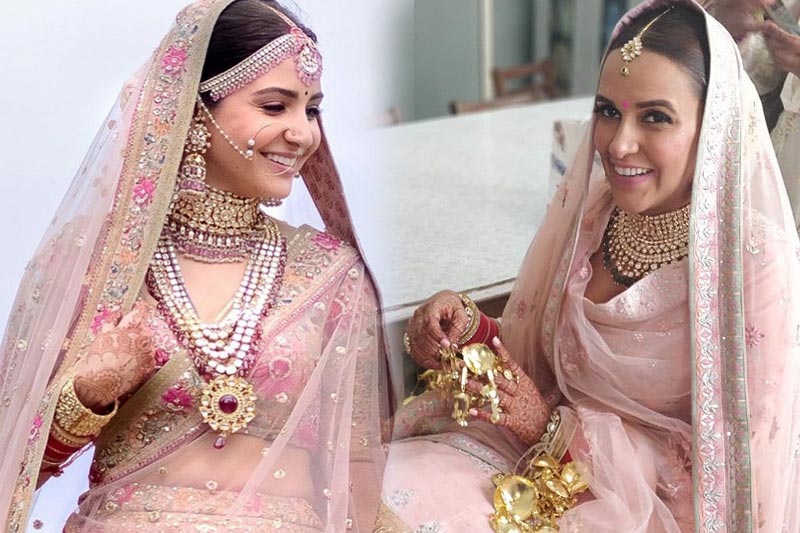 The glow on your face is spilling the beans that your wedding is fixed but at the same time you are in a fix as to which colour lehenga to wear on your special day! Everyone suggested traditional red but your heart wants to ditch the conventional colour and choose a different hue instead. Many Bollywood divas have given us major wedding outfit goals by flaunting designer lehengas in colours like pink, peach, green, purple and golden.

Seek inspiration from them, go with your heart and walk down the aisle in your favourite colour and be a diva bride!

Anushka Sharma and Virat Kohli's wedding became talk of the town for many reasons and one of the reasons was Anushka's dreamy pink lehenga. Ditiching traditional red, Anushka chose to adorn pink. She teamed the designer lehenga with traditional jewellery and minimal makeup. The embroidered lehenga was embellished with silver-gold thread, pearls and bead work.

If you are a bride-to-be and looking for trendy bridal outfits for your trousseau, explore Like A Diva’s handpicked Wedding Collection for style inspiration.

Every girl swooned over Mira Rajput's pink lehenga when the pictures flooded the net. She chose charming baby pink lehenga adorned with silver and golden work.

This designer lehenga featured backless choli and two diaphanous dupattas - one for the head and another worn as a half saree. She teamed the outfit with a statement neckpiece made of coloured gemstones, a traditional half sun maang tikka and a jhoomar.

Discover the latest styles of designer lehengas for all the wedding ceremonies.

On her special day, Neha chose to slip into blush pink chanderi lehenga embroidered with floral motifs. The lehenga was adorned with gota patti, zardozi, thread, dori and sequins work. It was teamed with sweetheart neck choli and a matching organza dupatta.

Check out a stunning range of Indian dresses for brides-to-be, bridesmaids and guests for all wedding ceremonies, including sangeet, engagement, haldi and reception.

On her big day, Kareena looked no less than a queen and turned heads when she wore her mother-in-law's wedding outfit passed as a family heirloom. Her stunning deep burgundy gharara comprised kurta, farshi paijama and dupatta.

Featuring green satin and gota border, it was recreated using gold Benarasi fabric in the likeness of the original ensemble.

If interested in designer gharara/sharara, read – TREND ALERT: SHARARA AND ITS COUSIN GHARARA ARE MAKING A BIG COMEBACK!

Aishwarya Rai adorned the traditional yellow and golden Kanjeevaram saree on her wedding with Abhishek Bachchan. The designer saree featured gold border and studded Swarovski crystal and was worth Rs 75 lakh.

This is the costliest saree a Bollywood actress wore on her wedding day.

Like A Diva’s exclusive designer sarees are perfect to capture the essence of your inner diva.

Former beauty queen, Dia Mirza tied knot in an elegant golden green designer Mughal era joda. The outfit featured a kurta, farshi paijama and two dupattas. It has been embroidered by master craftsmen with a lineage from the Avadh court. The kurta was embellished with zardozi around the neckline.

Which actress’ wedding outfit you liked the most? And which colour lehenga you finally decided to wear on your big day? Mention in the comments below.