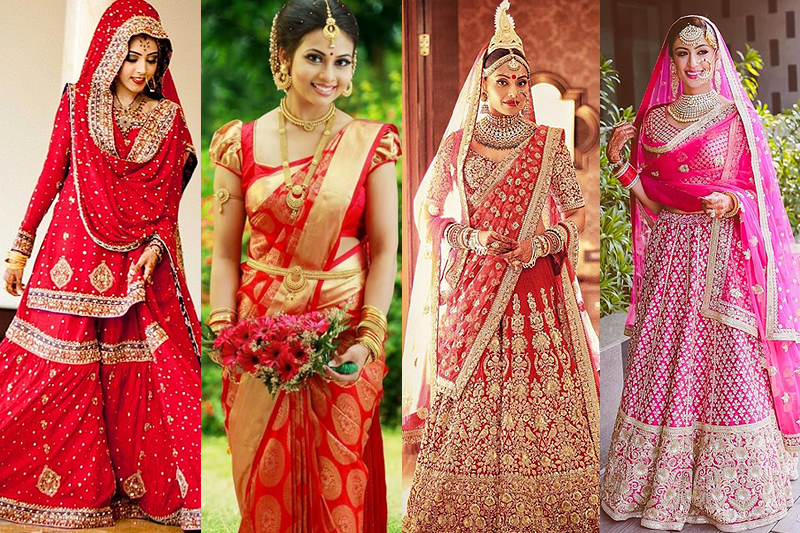 Know more about Indian states weddings and their dresses

We all know that India is known for its diversity. Different states in the country have their unique cultures, customs and rituals. It is quite obvious that weddings in India will also vary from one state to another and so will wedding costumes and rituals. Indian ethnic wear for weddings are extremely gorgeous, though they vary from one state to another.

Mentioned below are some prominent Indian states weddings and their attires: 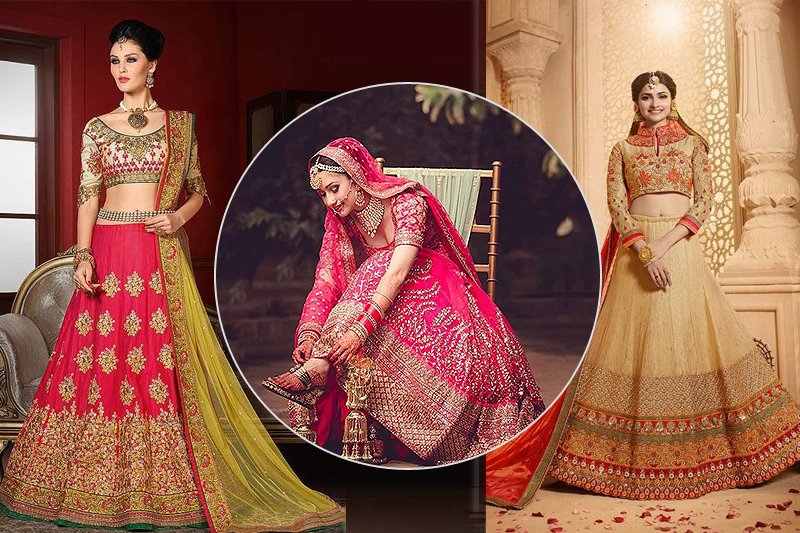 Punjabi weddings are extravagant and pompous affairs with singing, dancing, food, fun and frolic from both the bride’s side and the groom’s side. Some rituals that are closely associated with Punjab weddings include tilak, mangni, roka, mehendi, sangeet, haldi ceremony, chooda chadhana, kangan badhana, kalire etc.

Costume of the bride in Punjabi weddings is gorgeous. Indian wedding lehengas or wedding salwar kameez in bright red color are popular choices with Punjabi brides. Both these costumes come with a veil, which covers the head completely. Suitable jewelleries are also adorned with the costumes. 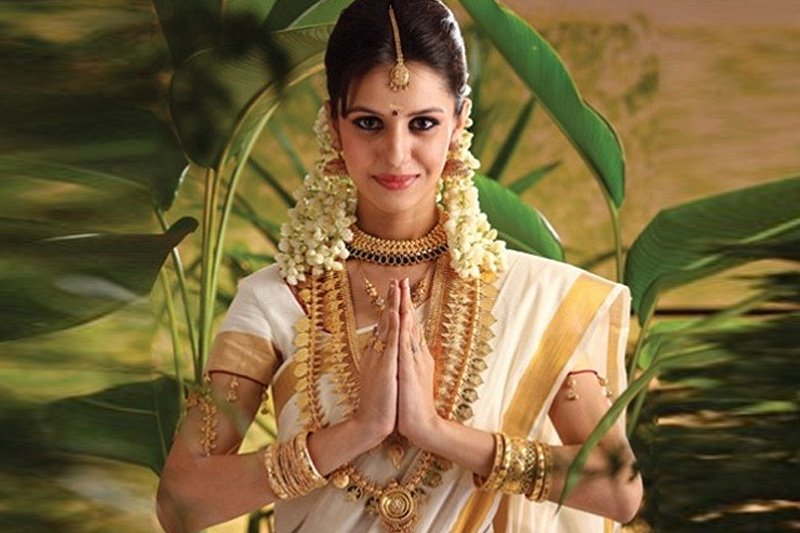 Malayalam weddings are hosted in the maternal house of the bride. After the traditional wedding ceremony, there is a grand reception, followed by traditional feast and griha pravesham of the new bride.

In Keralite weddings, the bride adorns a Kanchipuram or Kanjeevaramsaree in bright shade. Off white saree with golden border is also seen in weddings. Flowers are used extensively for hair styling in this wedding. Special mention needs to be made of the heavy jewellery, which is an integral part of Kerala weddings.

Bengali weddings have immense warmth in the rituals. The ‘gaayeholud’, ‘subhodrishti’, ‘saatpaak’, ‘bashibiye’, ‘sindoordaan’ etc are important rituals in Bengali wedding. Some of the rituals are for fun sake as well.

In Bengali weddings, you will see the bride in a bright colored Benarasi saree. Though red is the preferred color, now brides also like trying different shades of red, pink etc for the wedding. Beautiful designs are created on the forehead of the Bengali bride with sandalwood paste. The large red bindi in the center makes her look almost like a goddess. Suitable jewelleries are also adorned by the bride. 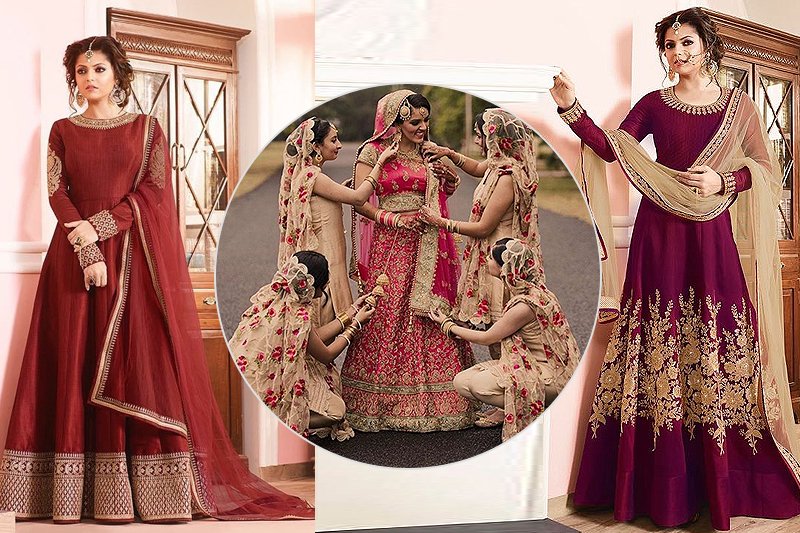 The best part of Sikh weddings is that the rituals are crisp and sorted. The main ceremony of the wedding takes place in the Gurudwara. Families of both bride and groom have to take a date from the Gurudwara for the wedding. The official Sikh code of conduct is followed in these weddings.

Costume of the bride for Sikh wedding is stunningly beautiful. Bridal Anarkalis, bridal salwar suits or Asian wedding lehengas are the most popular choices of the Sikh bride. The costume should preferably be in bright red color and the head must be covered by a dupatta. The ornaments that the Sikh bride generally wears for the wedding include a nath (nose ring), raanihaar, set of red, white and golden bangles, maangtika, heavy necklace etc. 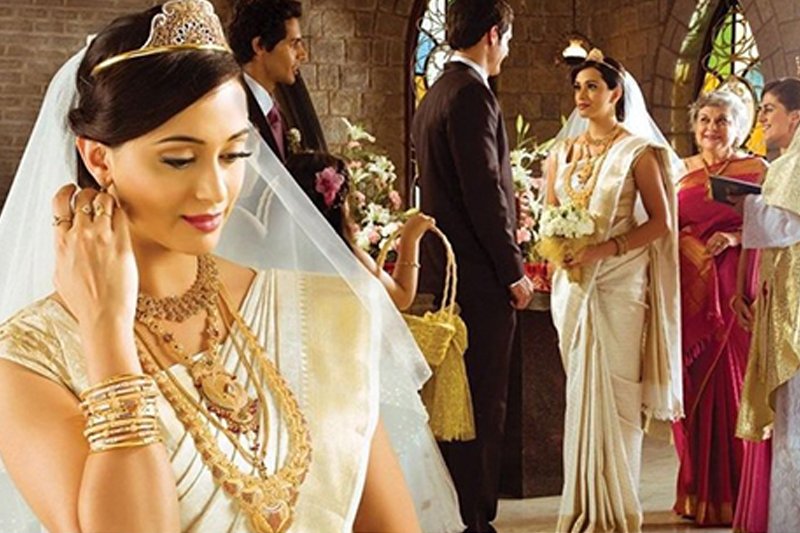 Christian weddings take place in the church, where before the priest the man and woman take vows to be together in thick and thin and are declared husband and wife. Once the wedding is over, a grand reception party is thrown.

Though white gown with the veil is the most common attire for Christian weddings, Indian Christian weddings see brides wearing a bright white saree with a golden border.  The princess style veil is a must in this attire too. Suitable jewelleries are adorned with the saree. 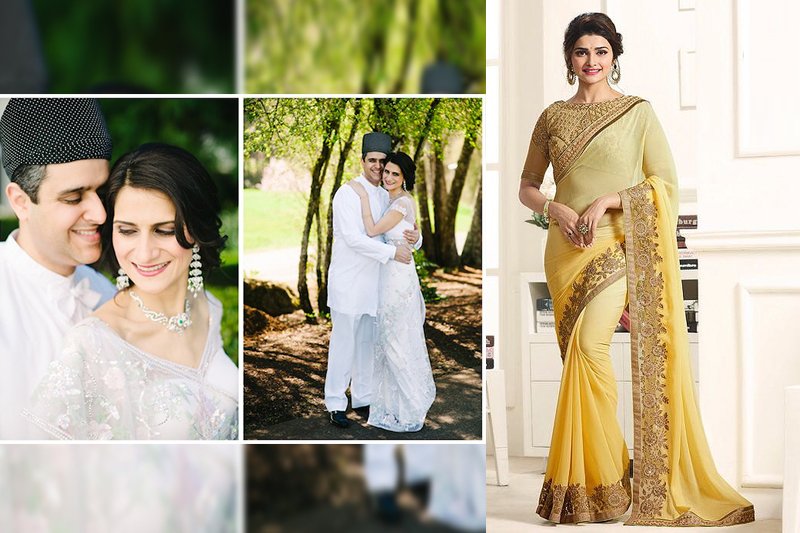 In Parsi wedding, relatives and friends gather and is known as Shahjan. Once the ceremony begins, the groom takes the seat first and the bride makes an entry later. The wedding is known as ‘Achumichu’. This event main is hosted at an Agiary or a Baug.

Beautiful white embroidered saree is the costume that a Parsi bride adorns. The embroidery is done with gold or silver threads and looks amazing. Matching diamond jewellery gifted from groom’s side is worn with the saree, while the head remains partially covered. 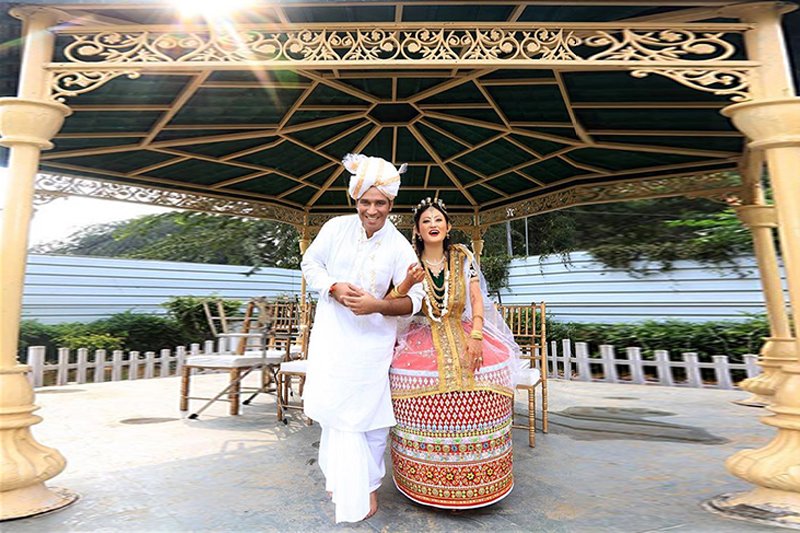 Manipuri weddings are extensive and include many kinds of pre-wedding ceremonies like Yathang thanaga, hinaba, heijapot and waraipot puba. Releasing a pair of taki fish in water during garland exchange ceremony of wedding is quite interesting.

The bride’s costume in Manipuri wedding is bright and beautiful. The stiff skirt that the bride adorns is called ‘raslila’, the matching blouse called silum and the black sarong called pindhan. The bride adorns basic jewelry as the costume itself is gorgeous and bright. 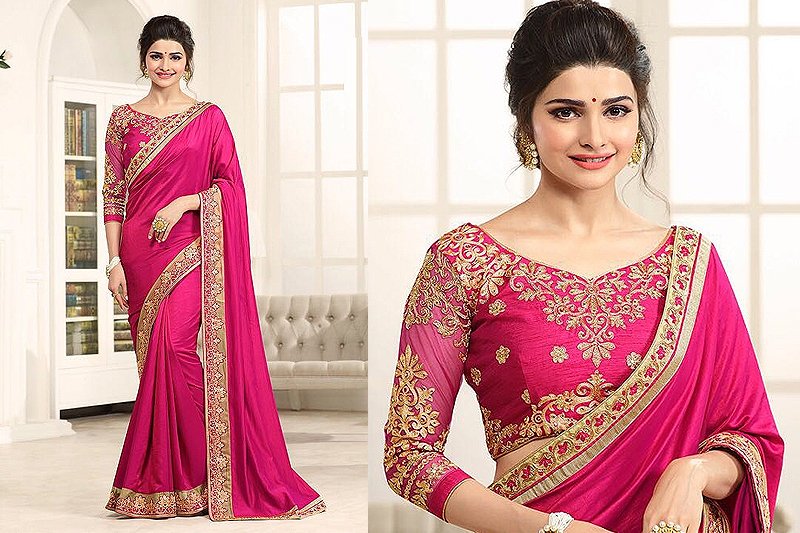 There are many functions that make up Marathi weddings – engagement, mehendi, haldi, wedding, reception and lastly griha pravesh. The bride is taken to the wedding altar by the maternal uncle. The wedding ceremony takes place elaborately with the saat phera and other rituals. Post-wedding ceremony, gifts are exchanged between the bride’s and the groom’s family.

The nath (nose ring) and the toe ring are mandatory ornaments for the Marathi bride. Bright colored sarees with heavy embroidery work is chosen for the bride and worn in traditional Marathi style. Another accessory that is a must is the plain headband. Both the bride and the groom have to wear this during the ceremony. 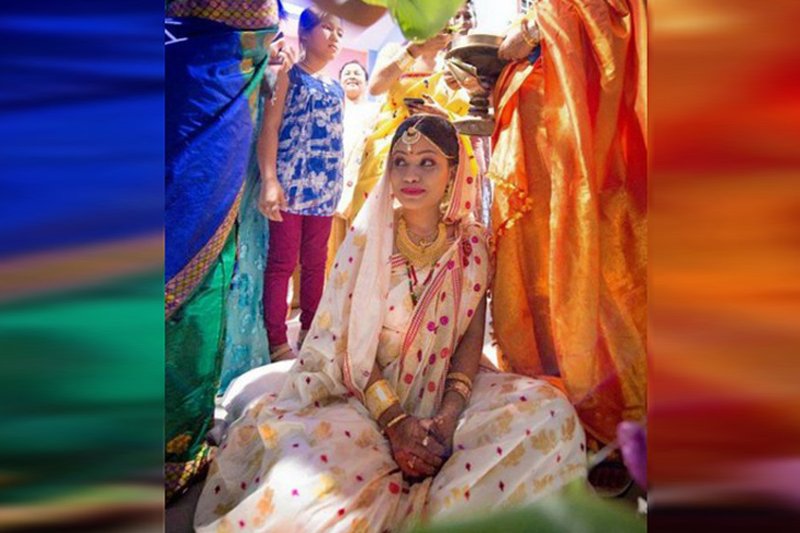 Assamese weddings are quiet affairs. Pre-wedding ceremonies include teldiya, jurandiya, nuani and panitola. The groom’s side bestows gifts to the bride and family of the bride. The bride and the groom bathe with the sacred water collected by their respective mothers. The main wedding ceremony is simple with a feast and a pot full of jiggery.

The Assamese bride wears a traditional saree with white base and golden and red motifs all over. Heavy jewellery completes the look of the bride. 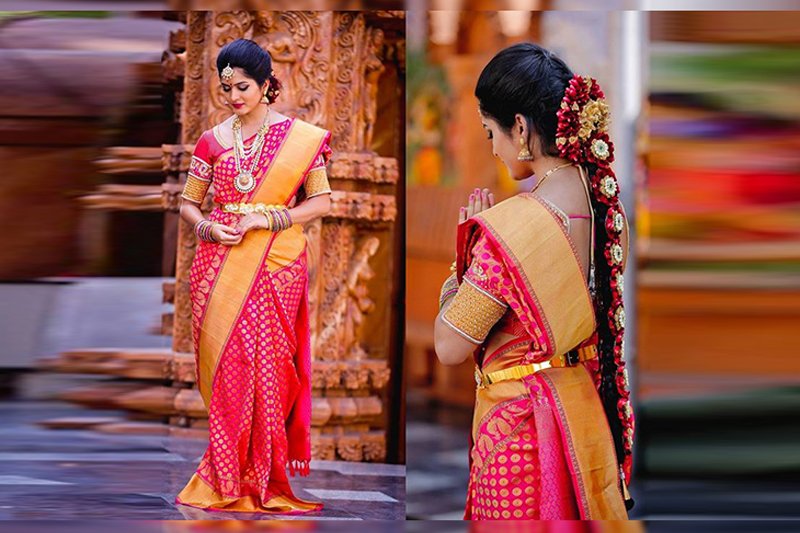 Bright colored Koorais arees are adorned by the Tamil bride, which has bright red hues with golden and floral motifs. Jewellery is also adorned, which include the maang tika, earrings, layered necklace and baaju band etc. Flowers are used for hair decoration too. 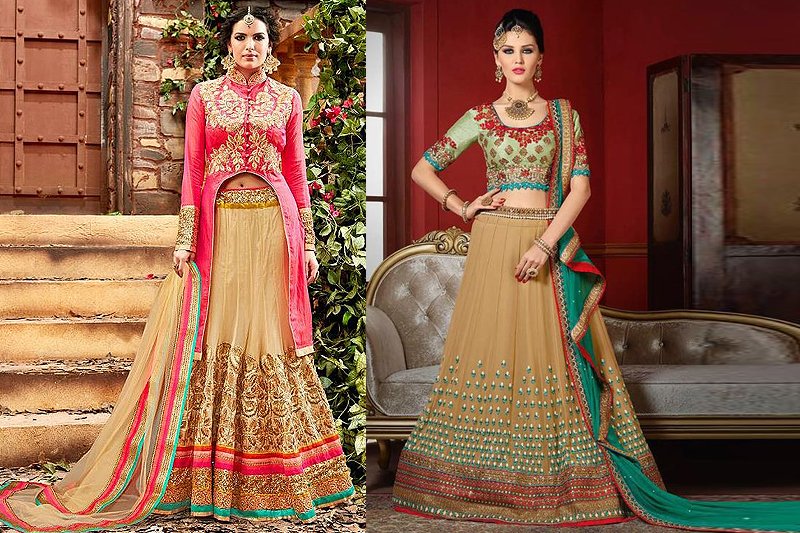 Gujarati weddings are elaborate affairs with many rituals and ceremonies taking place one after the other. Some of them include Lord Ganesh puja, jaan etc. The main wedding ceremony comprises of the jaimala, gath bandhan, hasta milaap, kanyadaan, saatpheraand bidai.

The Gujarati bride either adorns a bright saree in Gujarati style or wears a lehanga choli. Suitable jewelleries are also adorned by the bride to complete the looks.

With so many e-commerce sites, it is possible to order traditional Indian dresses online easily now. Right from bridal wear to Indian party suits, you will be spoilt for choices while browsing through the online stores.